We are proud to announce that in 2023 the BTFA will celebrate its 25th Anniversary, as 1997 was the year that we became an incorporated association. We have compiled a bit of the BTFA’s history in the article below.

The BTFA had its first beginnings back in 1996-97, when two South Australian-based Bowen therapists, Robert Andersson and Gillian Taylor presented the idea of forming a body of Bowen therapists. Their vision became a reality in July 1997 when, due the persistent efforts of a dedicated group of people, South Australia became the first state to register the Bowen Therapists Association of South Australia Incorporated (BTASA Inc).

From that beginning, the inaugural management committee was formed to get the Association up and running. It was initially mostly made up mostly of the people who were instrumental in establishing it, and others with special skills were also invited to join.

The first general meeting of the association was held in Adelaide on the 20th of September 1997. It was a huge success, with about 45 people in attendance – many who had travelled from regional SA to be there. The response to the setting up of the Association was very positive. During the same weekend, Russell Sturgess (who had travelled from Queensland) presented a Fascial Kinetics workshop to a group of 25 keen students.

Victoria, WA, ACT and Queensland followed quickly in setting up their own state associations using the same basic constitution that Brian had written for the SA association.

Bowen News was started by Brian, who was Editor of the first 6 issues for the BTASA. Each state originally had their own newsletter.

The first conference was held in SA the following year in July 1998, as the main people involved were from either SA and Victoria. The inaugural conference was held at Goolwa at the southern Fleurieu Peninsula, an hour south of Adelaide. The venue was the historic 100-year-old paddleboat, the Murray River Queen that had been transformed into a floating motel and function venue. 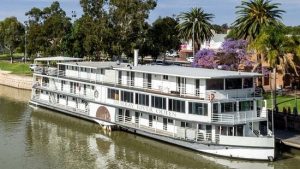 The Murray River Queen, venue for the inaugural conference in 1998.

Tom Bowen’s daughters, Pam Trigg and Heather Edmonds spoke at the first conference, providing a real insight into their father and family. This was the first time the family had been able to tell the public their story about the founder of the therapy named in their father’s honour. 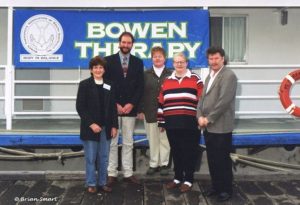 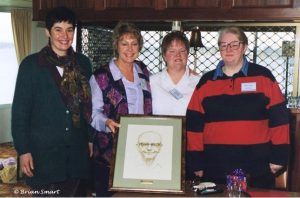 It was a very heavy first year for the association, whose hard work paid off – in just over 12 months they managed to set up a truly national body, which was quite an amazing feat for a group of dedicated volunteers.

The second conference was held in Geelong, Victoria in 1999 and with Brian’s help, established a NSW association in 2000 with Pat Piper as Chair. NSW later joined with ACT. Brian and Libby stayed in their positions for 3 years and then David Grubb took the position of Chair for 1 year. Pat stayed on as Chair for 3 years, followed by Peter Fulwood for 2 years.

David Paris, an academic from WA then took over and following that, Cathy Butlin took the reins for 3 years.

Barry Samels from SA then became involved during this time. He had already steered a committee to set up a national association. Taking over as BTFA President, Barry did a tremendous amount of work to set the BTFA up as a business.

Thank you to all of the special people who have made the BTFA what it is today!

With thanks to Brian Smart, Pat Piper and Peter Fulwood for their valuable input to this article.