Bowen Therapy takes its name from Thomas Ambrose Bowen (1916-1982), a remarkable and humble Australian man whose unique approach to the complementary health field brought comfort to hundreds of thousands of people throughout the world.

Tom Bowen became interested in ways to alleviate human suffering, noticing that certain moves on the body had particular effects. He developed an innovative manual therapy for the treatment of musculoskeletal and neurological disorders (that became known years later as 'the Bowen Technique') without having previous formal training in any modality or discipline. He continued to develop and refine the technique throughout his lifetime with the help of his friend and secretary, Rene Horwood.

Tom initially started his clinic from in Geelong, Victoria in 1957. Originally, this was in the evenings after working at his day job at the local cement works. He would often work into the early hours of the morning, treating many clients for free. He would work like this for many years before he started to accept donations for his services.

Eventually he left his job at the cement factory and began to run a clinic full time, typically treating up to 65 people per day (sometimes up to 100 per day) in the clinic, which eventually grew to 13,000 treatments per year. After the day's work was done he would then do home visits. Children, people with disabilities, and community service workers were always treated for free.

Tom’s own granddaughter suffered from a disability and died at an early age. In her memory, Tom ran a free clinic for children with disabilities, twice a month on Saturday mornings. Under his care and guidance, many children had an improved quality of life. Tom devoted his life to the children, who often called him ‘Uncle Tom’. This legacy is continued to this day through the establishment of the Tom Bowen Legacy Trust Fund.

After Tom Bowen passed away in 1982, Dr Romney Smeeton and Dr Kevin Ryan ran his Saturday morning children’s clinic on a monthly basis for a further 12 years. Typically, the children presented with conditions such as polio, cerebral palsy, paraplegia, quadriplegia, spina bifida, learning difficulties, asthma and many more.

Tom never documented his technique, but instead trained six students who developed training in Bowen therapy - thus continuing his legacy and gift to the world.

I expect to pass through this world but once
Any good thing therefore that I can do,
Or any kindness I can show to any fellow creature, let me do it now
Let me not defer or neglect it,
For I shall not pass this way again. – John O’London

Below is a transcript of a letter from Brian Sheean, a former client of Tom Bowen's in the 1970s 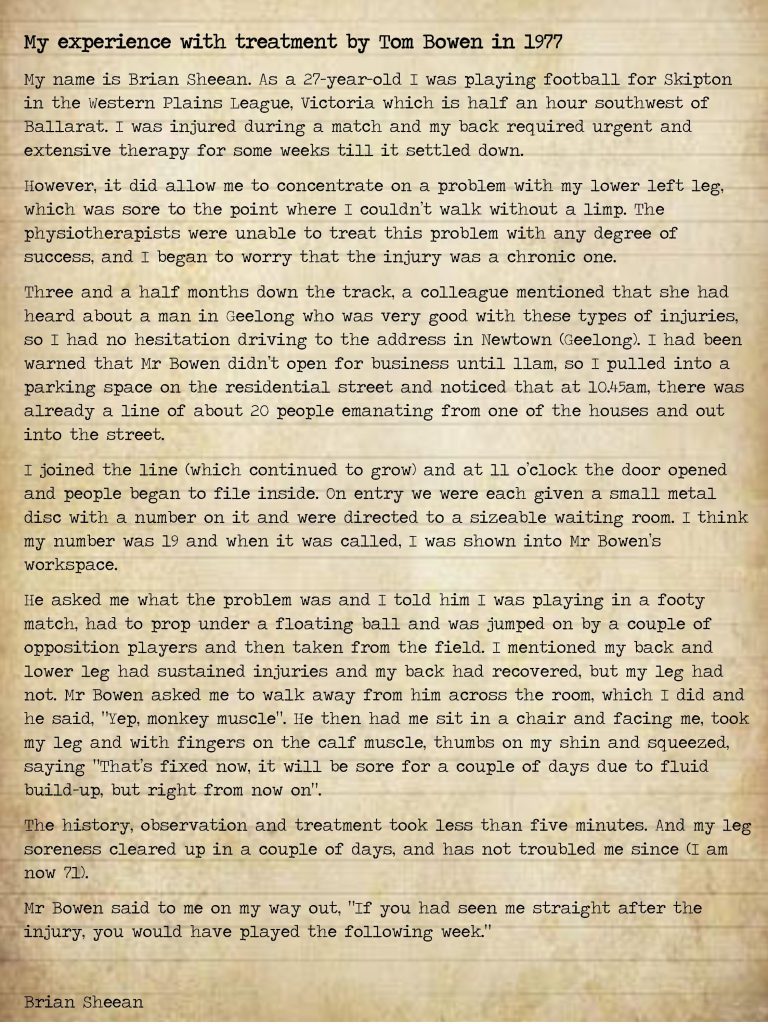